Deeping Rangers first team play in the Premier Division of the Eagle Bitter United Counties League.  Last season, under new manager Tuncay Korkmaz, they were league champions. They went 29 league games before suffering their first defeat. Also for the first time they won through 2 rounds of the FA Cup. And manager Tuncay Korkmaz was chosen as the Eagle Bitter United Counties Premier Division Manager of the season – not bad for his first season in management.

“The Local”  Newspaper’s Sports Awards Nominees 2007 have been published, and Deeping Rangers have two nominations. Deeping Rangers have been nominated in the category of Team of the Year for winning the UCL Premier Divison. Tuncay Korkmaz has been nominated  in the category Manager/Coach of the Year. To help us win both of these awards please vote for them both by either buying the Local and filling in the coupon, or telephoning them on 01778 425876, or email them at: the local@jpress.co.uk

Rangers recent away record is impressive with 15 goals in 4 games after a 4-1 win at Potton. This followed a 5-1 win at Newport Pagnelll and  a 6-2 win at S&L Corby which sandwiched a 0-0 draw at neighbours Bourne. They drew their last home game against high flying Boston 2-2  and before that won 2-1 home against Raunds Town. Previously they had   just 1 win (a 3-0 win at home to neighbours Holbeach), 2 draws and 3 losses Their next league game is at Potton on Saturday 20 October.

In the FA Vase they had been given byes through the preliminary rounds due to their league championship last season, and so entered at the first round  at home to Woodbridge, and lost 1-2 after Woodbridge scored in the 89th minute!

In the FA Cup they easily won their extra preliminary round tie at home against Lincoln Moorlands Railway by 5-0. They then drew 0-0 at home to Dereham who had produced the biggest winning margin in the extra preliminary round with a 12-0 home win against Fakenham! A Danny Matson goal after just 2 minutes secured a 1-0 win in the replay at Dereham. They then lost 0-2 at Bury Town. So for second year running they fell at the third hurdle.

Rangers had played 5 pre season friendlies, winning 2 (Deeping Sports, and Peterborough Sports), drawing one (Hollwell Sports), and losing 2 (Grantham and Stamford –  both of whom play in higher leagues to Rangers). 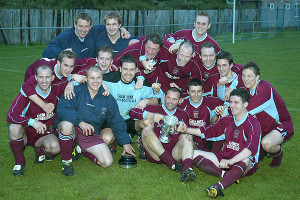