The Club was formed in 1966 (1964 as a Sunday League team) and tasted glory in their first season.

Based at Maxey Road, the Club won both the Peterborough and District League Division Three (North) title as well as the PFA Minor Cup in their opening campaign.

Maxey Road was their home until 1982 when they moved to the Deepings Leisure Centre. From 1985 the Club have been based at Outgang Road, where they share superb facilities with Market Deeping Cricket Club and the Deeping Tennis Club.

The first team were champions of Peterough and District League Division Two in 1968/69 and followed this success with the Division One title the year after.

In 1995/96 Deeping Rangers were runners-up in the Peterborough and District Premier Division, a feat they repeated in 1998/99, under the management of Mel Landin, this time to earn their historic promotion to the United Counties League Division One (UCL).

In their first season in UCL Division One, they finished third missing promotion in the final game of the Season. Chris Becket took over as manager for season 2000/1 and Rangers were UCL Division 1 runners up – losing out on goal difference but winning promotion to the Premier Division.

In their first season in the Premier Division Rangers finished 10th

At the end of that season, Chris Beckett and Dave Simpson decided they had earned a rest from management and a new management team – Paul Kirk and Pat O’Keefe took over at the beginning of 2003/4 season. The season brought another away draw in the FA Cup – this time at Unibond league team Eastwood Town . Deeping earned a 2-2 draw and played their first home FA Cup match on 3 September 2003. Unfortunately they lost narrowly 1-2. The league perfornance was disappointing, with only 17th place.

Towards the end of that season, a new manager, from outside the club, was appointed – Vince Adams.

For season 2004/5 Vince introduced a lot of new players and developed a number of the home grown youngsters. The season started well with the clubs first winning game in the FA Cup. The season was plagued with injuries, and they eventually finished 12th.

Season 2005/6 started badly with only 14 points from 20 games. However they did manage to reach the first round proper of the FA Vase for the first time, winning through two qulifying rounds on the way. League results inproved at the beginning of December 2005 and upto mid January 2006 they had won 5 out of 6 but relegation was only just avoided, and Vince Adams resigned at the end of the season

Season 2006/7 under new manager, Tuncay Korkmaz, was a new high. In September for the first time ever they both topped the league and WON THROUGH TWO ROUNDS OF THE F A CUP, before losing at Rugby in the Ist qualifying round. At the 20th February 2007 they topped the table by 12 points having played 28 league game without defeat – a league record, And on Tuesday, 17 April 2007 Deeping were crowned Premier Division champions for the first time after a comfortable win 2-0 win at Northampton Spencer. Mark Baines put Rangers on the way to victory after 27 minutes, picking the ball up in midfield and embarking on a solo run before unleashing a stunning shot which went in off the post. The win was sealed two minutes into the second half when Sam Bettinson headed home from a Younis Tajer centre. 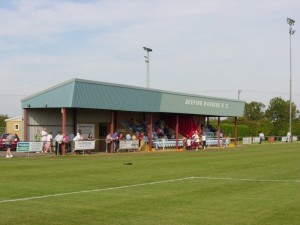 THE OTHER SENIOR TEAMs

The Reserves, were formed in 1985 along with the A Team – the B Team joined them in 1993. At the end of season 2004/5, with a restucturing of the Peterborough League, Deeping’s “A” and “B” teams were devolved to form a new cluib, based at Outgang Road – Deeping Sports. This allowed the two teams to continue to play at the level they had been used to, rather than having to play in a “Reserves League”.

In 1987, an approach by representatives of several sides led to all the youth teams within the Deepings being amalgamated under the Deeping Rangers banner. So the impressive ground at Outgang Road boasts four pitches to accommodate the senior sides and the many junior teams from U-7s to U-18s.

The junior set up has proved very successful with numbers growing each year, and has rewarded the club with some superb success stories. Season 2002/3 was a remarkable one, with the Junior teams winning 11 trophies. The highlight was the Under 11s who won their league, their league cup and the E.A.S.Y cup and were unbeaton throughout the season

Malcolm Christie and Ben Wright are testament to Deeping Rangers’ impressive youth policy that continues to bring talented players through the Club.

From Deeping, Christie joined Nuneaton Borough . from where he was signed by Derby County, and he made his Premiership debut midway through the 1998/1999 season against Sheffield Wednesday. He won England Under 21 caps and in 2003 moved to Middlesbrough, for whom he still plays but for serious injury.

Ben Wright after showing tremendous progress at Deeping was signed by Conference side Kettering Town, from where he moved to Bristol City. He moved from there to Norwegian club, Viking Stavanger for whom he scored in their 2003 Eufa Cup win over Chelsea. Then for 2003/4 season joined another Norwegian Club, Start Christiansand, where he still plays.

The most recent indicatation of the quality of Rangers Junior and Youth sections in bringing through quality players is the under 18s success in the F A Youth Cup in season 2003/4. After battling through 3 qualifying rounds, they were drawn at home to Mansfield Town. This was the first ever Deeping Rangers competitive match against a Football League Team. Despite going down 2-9, the boys played some excellent football. And 7 of that Under 18s squad went on to play for the first team including 2 – Matt Porter, Carl Griffiths and Andy Ellis- who progressed to be regular members of the first team

Off the pitch the Club has continued to grow. The main stand on the first team pitch cost £33,000 and took three years to complete. Minor modifications were made over the summer of 1999 to comply with UCL regulations. The Club – like the Cricket and Tennis Clubs with whom they share the site – have the use of the £250,000 sports and social club completed in 1999. In the summer of 2000 – after a successful fund raising appeal- floodlights were erected

In 2002 turnstyles were acquired from Wembley Stadium and these now form the centrepiece for a new ground entrance. The official opening was at the 2004 FA Cup tie against Glapwell, when the FA Cup itself was on show at Outgang Road.

During the summer of 2005 the main stand was refurbished adding with seats bought from Coventry City.

A comprehensive history of Deeping Rangers FC was produced by a long serving member, Brom Clarke. ‘Home Town Glory’ tells the story of the Club to 2001. Copies are still available from the Clubhouse and the Club shop on the ground at £5.00 or by post from the address on the Contact Us page for £7.50. Please make cheques payable to ‘Deeping Rangers FC’.